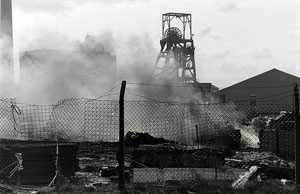 “Out of the dirt and darkness I was born, go down!”*

This is a picture of the Parsonage Colliery in Leigh, Greater Manchester. “The Pit” where my dad used to work back in the 50’s and 60’s. He finished at the pit when a heap of coal slag collapsed and partially crushed his leg. Not a sob story - he was sent away for months to the Coal Board’s rehabilitation centre down in Cheshire and gained a complete recovery. Didn’t want to go back to the mining though. There are safer ways to earn a living.

When I was thirteen, I followed my brother Tony to the Chat Moss and Marshall’s market gardening farm. He was killing time until he could join the Greater Manchester Police, I was scrabbling for money. At first I spent most of my summer days weeding whole fields of lettuce. Tony and the other older lads helped the adults cutting and boxing acres of celery, or screwing tons of beetroot, or scrubbing for bushels of radish. All back-breaking stuff whatever part of the process you were involved in.
At least it kept me out in the open with the elements. I learned to live with, and to work through the cold and the rain and the baking sun. I learned to like the exposure.

There is a romantic streak in me.  Why would I ever want to sit at home and watch the TV, cosy and warm, when I could be striding a fell, with night falling, clouds racing the moon and my cloak whipping in the wind? But all the years on the farm - the hard frost of a 6.30 start in early autumn numbing your fingertips, the rain mingling with snot dripping from your nose as you follow the planter in early spring, the sweat of a summer mid-morning as you heave the thousandth box of lettuce up to the bloke stacking the trailer - all that labour and discomfort couldn’t help but put the romantic back in it’s place.

The romantic wants to escape into the unknown, to seek out wonder and drama and adventure. The farm boy knows life’s all about digging not wandering. Digging for the coals to keep you warm, for the produce to keep you fed. My fantasy-writing feeds the romantic in me but oddly it’s poetry that keeps this farm boy properly grounded. Mostly I look at the world as it is, and people as they are. It’s an observational habit. You see something, you write about it. My poems provide me with memories of what I thought at the time and place I thought it. They will never be considered as literature but at least they’re an honest reaction to reality.

With the poems spread across several pages under general headings you might think some clever plan was involved.  It isn’t so. The poems are unconnected responses to disparate occasions or situations. I’ve avoided posting the crap inward looking, angst ridden efforts of youth so it’s fairly safe to explore.  If, remarkably, you like any of them, please feel free to copy, or to share. Just make sure my name stays with the poem - I’d hate to be consumed by the bloated cadaver of the late great anon.

You may be interested to know that six of the poems included on these pages have been
published in the anthology of stories and poems:
My Daughter was an Astronaut
My offerings aside it is an entertaining little book  - for more information go here
or visit the www.writenowgroup.co.uk website.

There is a songs tab. If you end up using a lyric or song please contact me:

Any use in performance should be with my express agreement. Which I’m likely to give.

Finally, strange person that I am, I love musicals - well good ones anyway. And because I write a lot of verse I thought I’d try writing my own.  The highly flawed HOME is posted on these pages. In my head I have the melodies as well as the story and lyrics but I’m very much aware I’m no musician. Someone out there could write much better melodies and arrangements for the piece than I could. If you read it and like it  and want to get involved - and you live somewhere in Eastern England - send me an e-mail. Without a collaborator HOME will languish on a shelf. Some might say that’s a good thing, but a small part of me suspects the work has some merit. Just a bit.

* The Big Hewer by Ewan MacColl